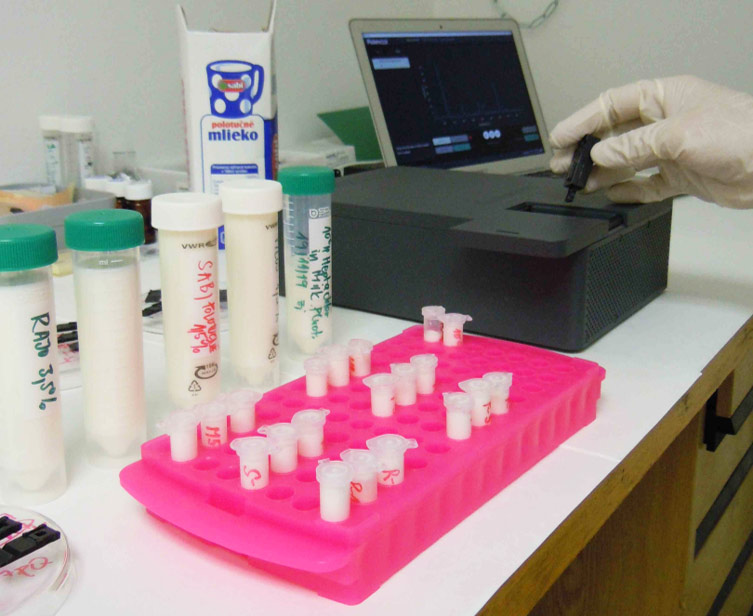 SAFTRA photonics has already performed the test measurements to provide the procedure for the standardization process of the PickMolTM technology to verify it as an approved reference method for high-sensitive screening of pollutant molecules in milk samples. The measurements were carried out in accordance with validation tasks performed previously according to the “Validation of environmental test methods CEN guide 2013” The PickMolTM technology, based on plasmonic-enhanced Raman scattering (PERS) and represented by a construction of particular topology/structure of nano-optical chips, was used to detect sensitively both the selected pesticide molecule (5×10-7 M Paraquat) as well as the mixture of pesticides (Paraquat – PQ, Diquat – DQ and Thiram – TR; 5×10-7 M PQDQTR) in a mode of multiplexing analysis in milk. We have randomly tested six commercially available milks with different milk fat content. The “Blank” sample measurements were provided with the use of pure milk (in the absence of pesticide molecule(s)).

PickMolTM technology was shown to be a powerful screening tool for direct and ultrafast analyses of the selected pesticides found in milk samples. The presence of target molecule(s) (PQ, PQDQTR) in milk samples was confirmed by characteristic Raman bands evidenced by pattern recognition analysis. It was demonstrated that PickMolTM Sensing Chip is capable to detect all three molecules directly in different kinds of milk (other molecules detectable directly in milk are listed in our databases).  Complete measurement protocol from sampling to data processing is achieved within 10 min and real samples analysis time is 2 minutes. In addition, higher sensitivity (at least of 1 order) can be achieved by simple pre-treatment process of the pollutant-milk sample.